BBC Panorama: on location with ISIS

The proximity of Conway and Panorama reporter Ian Pannell to the ISIS marked vehicle and its armed occupants at Atareb Hospital on 26 August 2013 contrasts markedly with an ostensibly tense scene shot earlier the same day in which the two-man BBC team passes through an ISIS checkpoint in apparent fear for their lives.

The ambulance was transporting a female alleged victim of an alleged napalm or thermite attack on the town of Urm al-Kubra, Aleppo. As discussed here, while the woman walked into the ambulance with composure and took an upright seat, following a 13 kilometre journey to Atareb she was filmed by Conway being ostentatiously carried out of the vehicle by five men, apparently screaming in agony. 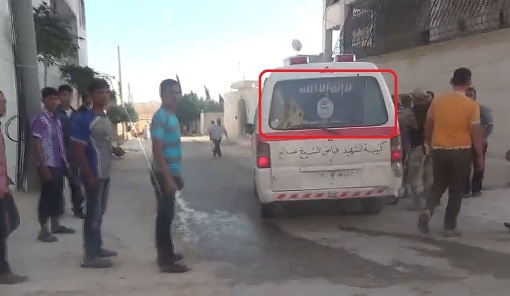 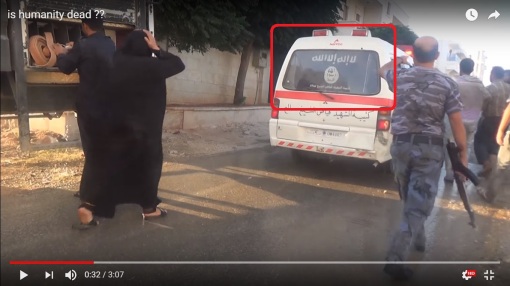 Ambulance sets off for Atareb https://www.youtube.com/watch?v=eXAFUehpE94 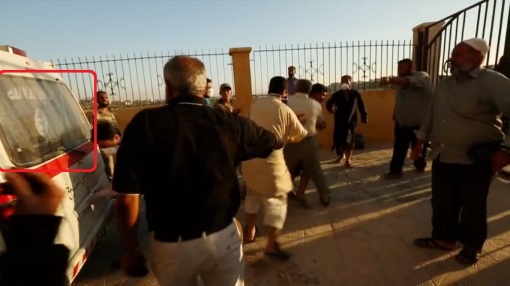 Ambulance arrives at Atareb Hospital where it is filmed by BBC Panorama cameraman Darren Conway (36:34 in Saving Syria’s Children https://vimeo.com/140567469). Two men in combat fatigues can be seen emerging from the vehicle, at least one of whom is armed (see http://bit.ly/2gpL1vx) 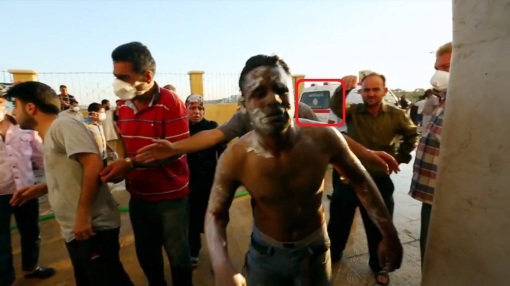 Pannell and Conway have recently been reported to the UK National Counter Terrorism Security Office over concerns that they entered into a business relationship with salafist jihadi group Ahrar al-Sham during the production of Saving Syria’s Children.

Ahrar al-Sham – described by the BBC as a “hardline Islamist group” [2] – worked with ISIS until January 2014. In light of the then partnership between the two groups it would seem reasonable to question whether the safe passage of Pannell and Conway’s Ahrar al-Sham convoy through an ISIS checkpoint (from 10:47 to 11:40 in Saving Syria’s Children) was not, at least to some degree, orchestrated. [3]

Award-winning US online magazine Paste has described Saving Syria’s Children as “a sham”. In October I gave this presentation outlining some of the concerns surrounding the authenticity of the programme:

So basically #BBC colluded with #ISIS in #Syria back in 2013. pic.twitter.com/2xdaD1mT3G

[2] As discussed here, Ahrar al-Sham was co-founded by “one of Osama bin Laden’s most trusted couriers”. According to Human Rights Watch, just 19 days before filming for Saving Syria’s Children began the group worked alongside ISIS and al-Qaeda affiliate Jabhat al-Nusra as one of “the key fundraisers, organizers, planners, and executors” of attacks in which at least 190 civilians, including women, children and elderly men were killed and over 200 mostly women and children were kidnapped.

[3] Pannell’s words during this sequence are as follows:

Travelling around Syria has never really been more dangerous, both foreign journalists and foreign aid workers have been targeted, some have been killed. We’re just going through a checkpoint now, put the camera down a bit.

[Narration] Rival rebel factions now fight each other as well as the government. Lawlessness prevails and areas that were once safe can become dangerous almost overnight.

This is an ISIS group, the Islamic State of Iraq and Syria. This is a group that’s affiliated with Al Qaeda. Increasing numbers of jihadis have come into Syria, they’re setting up checkpoints so it means that any foreigners in particular traveling around the country run the gauntlet of these checkpoints every few miles or so. And the worst thing about driving around is that you’re never sure what lies behind the next corner. 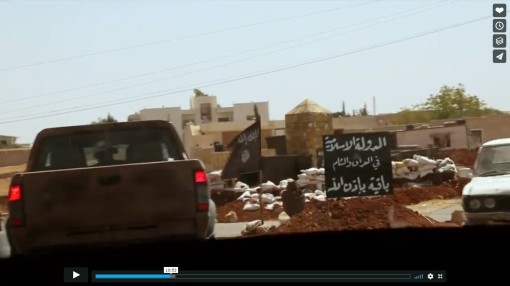 2 responses to “BBC Panorama: on location with ISIS”