See also this section of my March 2016 presentation on Saving Syria’s Children and this blog post.

“The principle behind ‘macro simulation’ is that it’s as close to reality as possible. Actors and make-up artists mimic even the most severe of injuries”.

The level of expertise in fabricating injuries and emergency situations demonstrated in this brief report would appear to be more than adequate to account for the hospital scenes in ‘Saving Syria’s Children‘ (from 30:38).

“In charge of the whole operation” presented in the Newsnight report is Brigadier Kevin Beaton. Dr Ahsan states of Brigadier Beaton “he was my squadron commander in Bosnia and inspired me to study medicine”.

HOSPEX has been described as a “firmly engrained part of pre-deployment training for Operations in Afghanistan”. Its origins appear to date back to the Cold War. [1] HOSPEX exercises are held at Army Medical Services Training Centre (AMSTC) near York. [2] An article about AMSTC in the April 2008 edition of Army Medic states:

“The site, which covers over two hectares, contains every department including operating theatres, A+E, ITU, X-ray, Labs and Wards etc, and it can be re-configured in hours to facilitate any medical training exercise, including Chemical, Biological, Radiological and Nuclear (CBRN) simulations.”

“Realism has to be an essential element of any simulated training package and so the casualties that we put through the facility are as close to the real thing as possible. To that end, we use trained actors and amputees who are actors, who have been dressed and made up by professional casualty simulation (make-up) artists who normally work in the film industry.”

Compare the image below of a “simulated burns casualty played by a professional actor” from the Army Medic article with that of an alleged napalm bomb victim from the BBC Ten O’Clock News report of 29 August 2013: 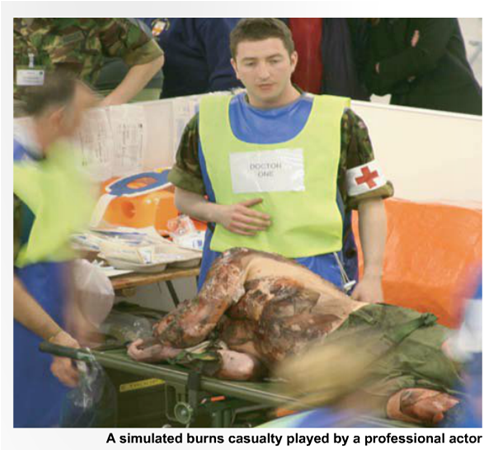 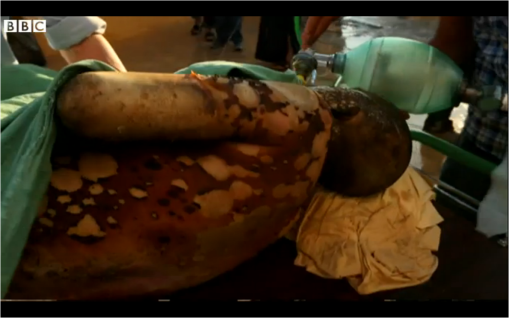 Compare also this image from a 2009 HOSPEX training with the one below it, provided by the BBC on 23 April 2014, which purports to depict another napalm bomb victim at Atareb hospital, Aleppo on 26 August 2013: 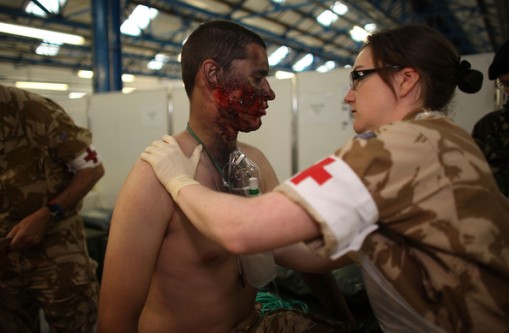 “A mock casualty is given medical assistance by volunteers from 256 (City of London) Field Hospital during an exercise at the Army Medical Services Training Centre, on October 2, 2009 in York, United Kingdom. Over 200 territorial army NHS staff and regular medics are taking part in HOSPEX to prepare them for their imminent deployment to Camp Bastion in Afghanistan. The training centre is a mirror of the facilities in there with actors and volunteers playing the role of casualties with typical war injuries.” 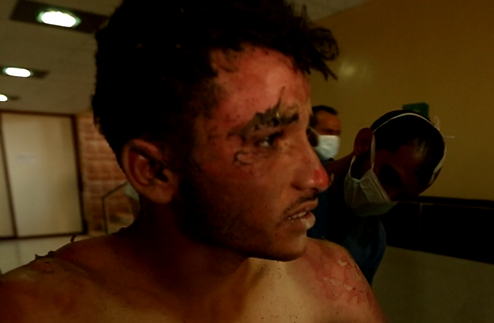 The degree of sophistication that would be required to have staged an incident such as this for the benefit of the cameras, and to have deceived such an experienced team, would, in the Adviser’s view, likely have been impossible on the frontline of an ongoing conflict.

These comments may perhaps now be viewed in a new light, as perhaps can the view of the consultant plastic surgeon cited in the BBC Senior Editorial Complaints Adviser’s decision of 26 September 2014.

Note also that Atareb hospital staff were “attending a battle first aid training course in Antakia, Turkey” on the date of the alleged napalm bomb attack, possibly indicating that some of the alleged medics filmed for ‘Saving Syria’s Children’ were not regular staff members.

[2] The company which provided the highly sophisticated injury simulations featured in the Newsnight report is Trauma FX, which proudly claims to be “UK’s leading provider of realistic casualty simulation”. 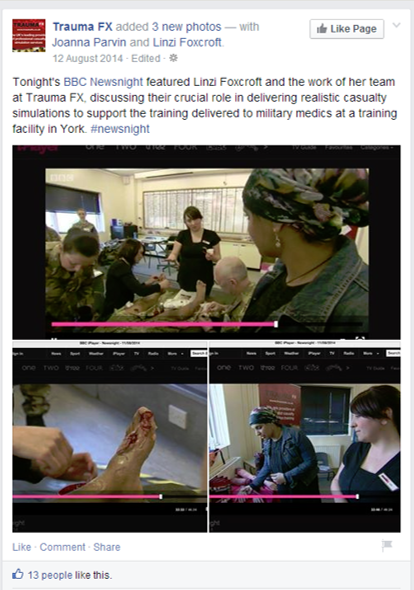 Post on TraumaFX’s Facebook page, 12 August 2014. The post has subsequently been deleted: https://www.facebook.com/TraumaFXUK/posts/431784723629501. The simulated foot injuries are described in the report as “degloving”, a type of alleged injury which features on several of the alleged victims in Saving Syria’s Children. 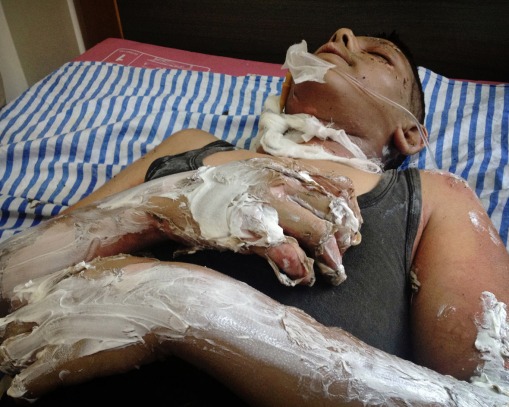 TraumaFX’s website states that it “support(s) various military forces internationally” and “can easily travel international as we are a mobile team and can work in any location”. The company has over 10 years’ experience of supporting UK military training exercises.

The company, which is based in Thirsk, North Yorkshire – just over 20 miles from the Army Medical Services Training Centre (AMSTC) at Strensall, near York, where HOSPEX exercises are conducted – also creates “SIMBODIES” – “life like dead bodies and body parts designed and produced to appear extremely realistic, heavily weighted and ideal for use in CSI, disaster victim identification and mortuary training exercises.” 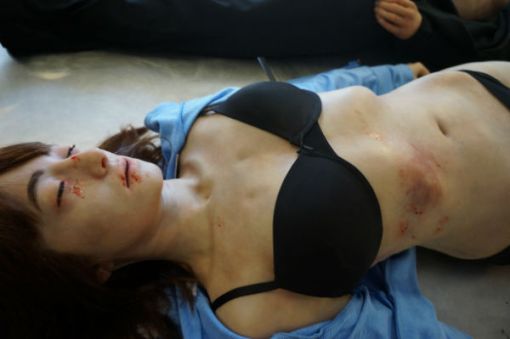 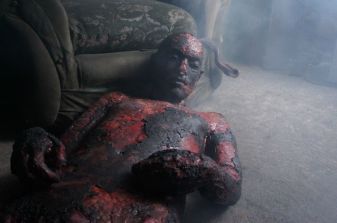 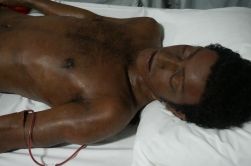 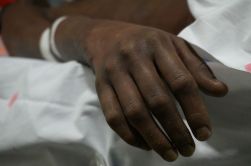 Further examples of Trauma FX’s impressive work can be viewed on the company’s Facebook page.