The below material, which has been provided to me by its author, discusses two 2012 BBC news reports from Syria by Ian Pannell, prior to Pannell’s highly questionable 2013 BBC Panorama special Saving Syria’s Children.

A REPORT by [name supplied] ACCUSING THE BBC OF BREACHING SECTION 11 (WAR, TERROR AND EMERGENCIES) OF THE BBC’s EDITORIAL GUIDELINES

The two videos being reported here have not been specially selected, they both appeared on the BBC website within hours of each other on the 25th and 26th June 2012.

They are typical of most videos being fed to the UK public by the BBC on the Syrian crisis. These are both from embedded reporter Ian Pannell who has little regard for peace-loving Syrians who support their homeland army and no doubt have sons and daughters serving in that army.

Using the picture of an injured child on the video link will no doubt raise its “hit-rate”. It is no doubt designed to upset those who want to believe that an eight year old child was deliberately targeted by a gunship helicopter shown in the opening of the clip.

The video and narrative claim that a “shell” fired by Syrian government forces hit the bedroom where six children were in bed, killing one and injuring the others.

You will note from the screen capture below that the “shell” did not penetrate the roof . The iron reinforcement bars can be clearly seen bridging the hole. Even the chandelier is still in place and relatively undamaged. Not being a military person, I cannot suggest what made that hole. 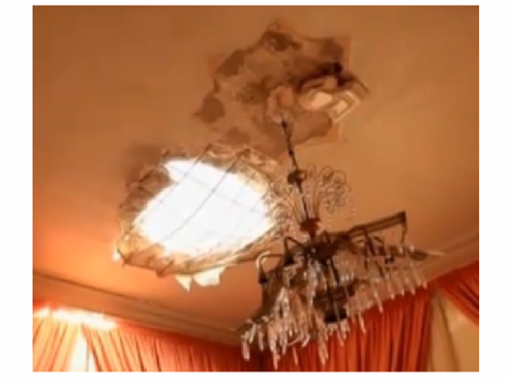 The only blood visible in the bedroom was on the curtain. 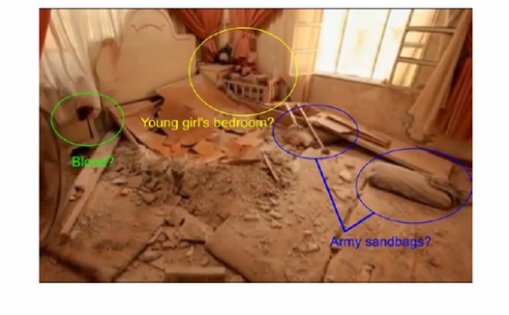 The blood could have come from a rebel fighter hit by a bullet entering the window rather than one of the boys allegedly laying on the bed. This is more than likely because two army sandbags can be seen in the room and may have been used to support heavy weapons. Then there’s the question: “Where did all the debris on the staircase come from?” 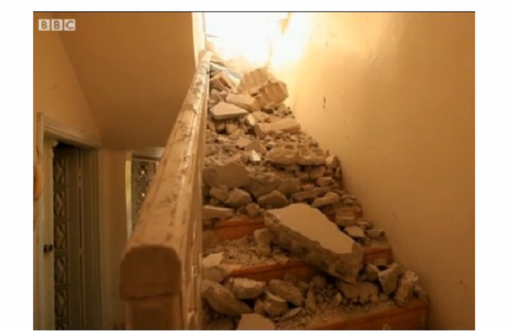 Clearly a wall or roof had been blown out, but the bedroom was hardly damaged.

It is also difficult to believe that the father of these boys owned the house. His appearance and demeanour is not, in my opinion, in keeping with the lush interior. 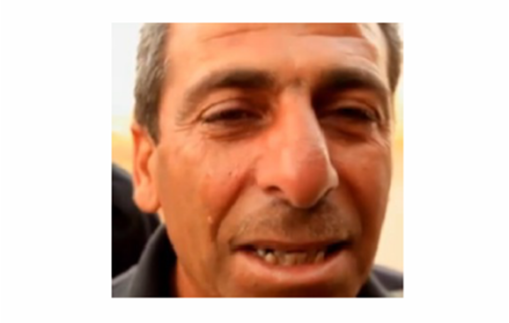 Did the father and his six boys live in this house? 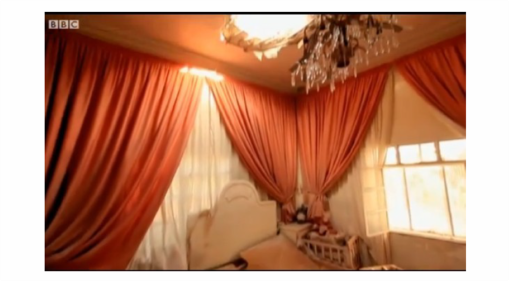 The video narrative said the children were taken to a secret location (shown below) because if taken to a hospital they would be arrested. Even so, it’s hard to believe that a father would not hesitate to do so. 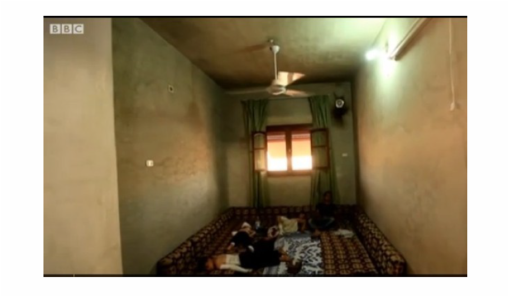 One child had what appeared to be a serious head injury and shrapnel wounds. But not the type of injury associated with falling debris. 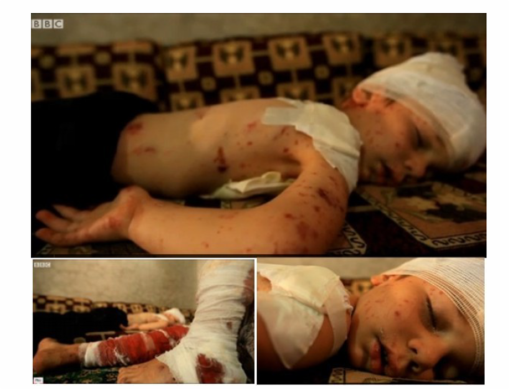 So where did these shrapnel wounds come from? He must have been close to an explosive device when it went off, but definitely not in “his” bedroom.

Any father who loved his children would take them to hospital and face any consequences later. No mention in the report was made as to why his family should fear arrest. Unless of course he was using his home and children as a human shield for the rebels to attack the Syrian army.

Then there’s the testament of the young boy who was constantly looking up (probably at a rebel fighter) and saying the right words at the right time and crying on demand.

“The Syrian army did this to me” the little boy says, and the commentary follows with “ and the rebels vow revenge as they plan to raid an army base”.

The video then switches to the rebel army. They are shown heavily armed with RPGs, grenades and home-made pipe bombs designed to kill and maim indiscriminately. Possibly breaching Protocol II: Mines, Booby Traps and Other Devices

Home-made pipe bombs and hand-grenades are part of their armoury.

After the now familiar and obligatory speech by the rebel army commander claiming there has been many massacres here of old men, women and children, the footage follows the rebel army towards its planned raid.

Approaching their target (the base of the Syrian army) they prematurely announce their presence by opening fire too early and spoil the intended massacre of homeland troops.

Gunfire erupts and street battles commence but the Syrian Army doesn’t appear to “be at home”. The rebels continue into the area. They fire rounds upon rounds around corners then fire at buildings but don’t appear to have anything to aim at.

It looks like an exercise. There is no indication of any response from the Syrian Army. Ian Pannell says “the rebel plan failed because the shooting broke out early, the base responded with heavy weapons, as you heard”. It is hard to follow Ian’s understanding of events because contrary to his narrative NO heavy weapons were shown to been or heard to have been fired at the rebels. In fact ALL the noise was coming from rebel RPGs. The middle-aged man dressed in casual clothes was particularly cool and active. Shown initially drawing a pin from a hand grenade or priming a pipe bomb – then …cut. He is not shown throwing it but I’m sure he didn’t hang-on to it. 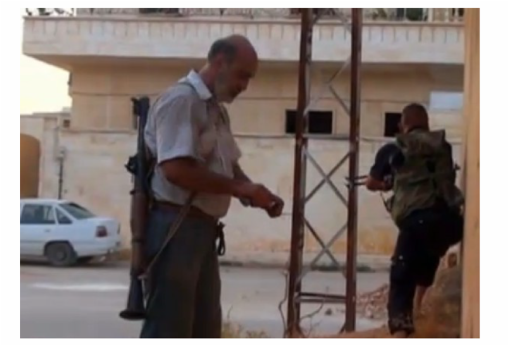 Next clip shows him on one knee firing a RPG then standing up and running back shouting orders. During the attack thousands of rounds were fired at surrounding buildings but seemingly without any specific target. In fact it looked more like a residential area than an army base. The RPGs must have damaged a lot of buildings, some of which may have been inhabited.

Maybe Ian (or UN peacekeepers) could return to the scene. They may find a few dead women and children, but that would not be reported would it?

This report REALLY puts the BBC to shame in the face of the world and in my opinion makes Ian Pannell complicite to a war crime. He is shown practically gloating over the laying an IED designed to murder entrapped homeland troops and any civilians in the immediate area.

The laying and activating of IEDs breaches Geneva Convention.Protocol II: Mines, Booby Traps and Other Devices.

I sincerely hope that somebody within the BBC hierarchy with an ounce of integrity will demand a change in course before the BBC are shown to be the USA/Israeli puppets as so often accused.