Below is the covering email followed by the full response. As is clear from viewing the file properties of the Word attachment referred to, the latter is authored by Saving Syria’s Children reporter Ian Pannell.

My response is here and my full correspondence with the BBC on this matter is here.

Thank you for your further contact. I’m sorry if you felt our previous response did not sufficiently address your concerns.

I have raised your complaint with the relevant people who witnessed and recorded the events in question. I attach our response in a Word Document, please be aware that it includes graphic images. It is not normal practice for BBC Audience Services staff to send responses from their personal email address; however, the size of the attachment demands this circumvention on this one occasion. I therefore kindly ask you not to publish my email address alongside any subsequent online publications.

This now concludes Stage 1 of the BBC’s complaints process, if you would like to take your complaint further, you can contact Stage 2 of the complaints process, the BBC’s Editorial Complaints Unit, within 20 working days of receiving this reply, and they will carry out an independent investigation. You can email them at: ecu@bbc.co.uk , or alternatively write to them at the following address:

Should you choose to escalate your complaint we would ask that you include the reference number provided above in your correspondence.

Please respond using the numbered section headings to ensure that all points are addressed:

Here is a still image from the film of one of the victims arriving, eighteen-year-old Mohammed Asi. The marks of eyebrows are certainly detectable. 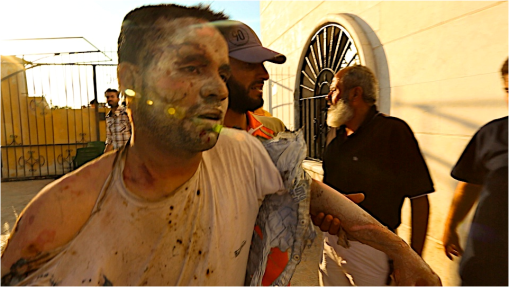 Here is a photograph of him taken two weeks after the attack in hospital in Turkey.

Any reasonable person would not describe this as a normal eyebrow.

Here are some stills taken from the video footage recorded at the time:

This is Lutfi Arsi, the boy you describe as “bored” and “relatively unscathed”.

This is Anas Said Ali who you suggest “canters” into hospital as opposed to desperately and painfully struggling to get in because there was no-one to carry him in when all the stretchers were occupied (perhaps you can detect the difference in colour between his face and legs and his melted hair). 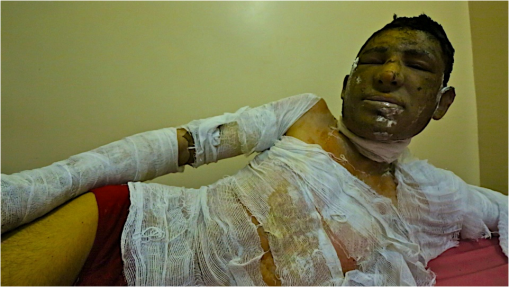 And this is Mohammed Kanas, the boy who gasps for water (as many victims did) because (as the Doctors explained to us) his airways were burnt. He is the victim you describe as ‘not badly injured’: 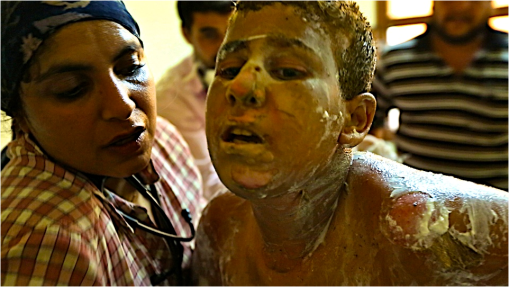 Finally, it is worth adding that some of the victims had suffered severe burns to their airways which of course you cannot see. 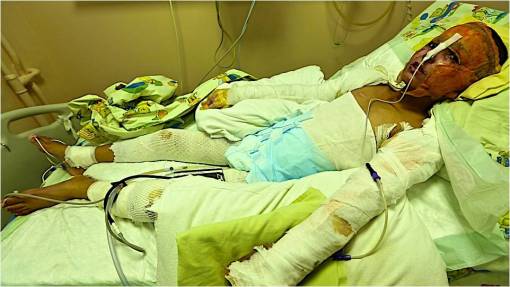 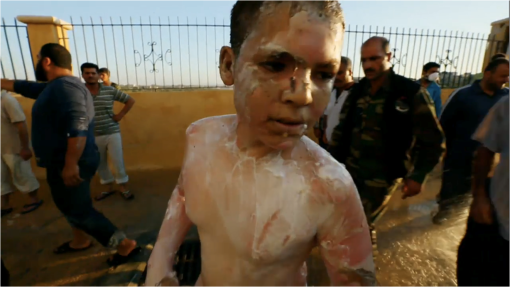 She, like all the victims would have been administered morphine and fentanyl to treat the pain, which might explain why she does not appear in “physical pain”. There was a constant stream of people arriving, some received initial treatment and then wandered outside and back in again. Some were doused in water outside the hospital because of the fear of chemical weapons. It was a scene of chaos with patients arriving, wandering in and out searching for treatment or family and friends or anyone to help, being taken back inside, some then being rushed off and in come cases brought back in again. This is how it happened and how it was depicted in the editing of the film. It was impossible to follow and report events chronologically and impossible to individually focus on any patients movement throughout the entire event because that would have meant not focussing on others, the wider picture or the doctors whose work we were supposed to be filming.

As for his father, perhaps he chose not to appear on camera, we do not recall him amongst the scores of distressed and shocked people crammed into the hospital working flat out to save lives or find out whether relatives were alive or dead. Many made the decision not to be identified for fear of being imprisoned and tortured by the government (something else which has been well documented).

As for your “evidence” about melted hair, you can clearly see in his image above (point 7) that Anas’ hair had partly melted; you can see this with Mohammed (point 6) and a number of others.

B – We are recording the audio of the two doctors with radio microphones at all times, and at times they are referring to patients that we have previously filmed or about to film, while we are filming something else. So their audio is still being recorded even though we might be filming blood on the floor, or a cutaway that enables us to show the scene happening all around which will help us in the editing process. So we use the audio of the doctors referring to the victims over actual images of the victims. Again, this does not change the context of the actual event that we are documenting.

C – The editing is not completely sequential, we are telling the story of the event, trying to capture the mood of the consistency of victims arriving outside while being treated inside (which is what happened), to show the chaos, and true horror of what happened. It is clear there is no attempt to ‘hide or mislead’ because it is obvious who the victims are and where they are at all times.

D – That is the same room throughout. There were many victims being treated in this room so we were trying to film them all, which obviously means filming from different angles and of course at slightly different times. During these times they are moved around from bed to bed, have different treatment, all of which is chaotic but necessary as their lives were trying to be saved. We do not stay in one place at all times and as you can imagine we also had to try and stay out of the way of the doctors and nurses when they required us to so they could do their work. We also move around because as people were being treated upstairs (in this room for example), others were being treated in other rooms, some victims were still arriving and some were being rushed off for treatment elsewhere. We were moving around capturing many different things all of the time so that we could try and show the story that was unfolding around us. As you can imagine, if we let everything just run without editing the sequences the film would last about 4 hours. This is what editing is for. 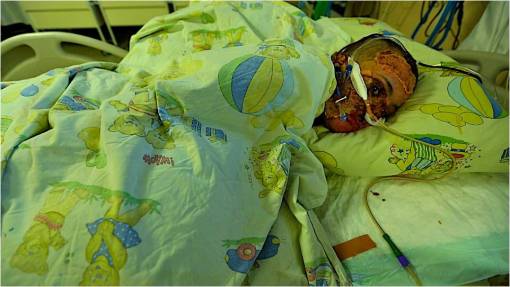 Both doctors had radio microphones throughout the days of filming and naturally described events and gave observations as they occurred in the hope of showing the world what the situation in Syria is really like for civilians, in particular children.

6 responses to “BBC response to second letter of complaint”