The previous post on this blog mooted a possible connection between the alleged 26 August 2013 Urm al-Kubra incendiary attack and the then incipient White Helmets, or “Syria Civil Defence”. [1]

Since then evidence has emerged which demonstrates that senior White Helmets were present at Atareb Hospital on 26 August 2013, where they were filmed by BBC cameraman Darren Conway.

According to the blurb promoting his September 2017 presentation at the Emergency Services Show in Birmingham “Mounir Mustafa is the Deputy Head of the Syria Civil Defense”:

When the Syria conflict started, Mounir and his colleagues started an independent emergency response organisation in 2013- known today as the White Helmets. 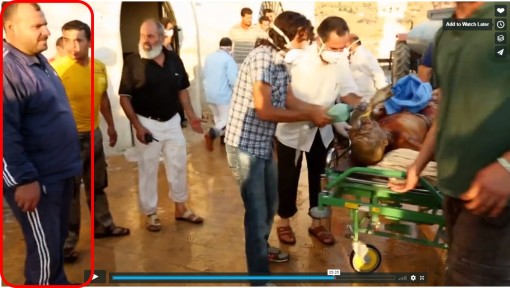 While the White Helmets acknowledged creator and trainer is in fact shadowy British mercenary James Le Mesurier [2], Mounir, who evidently laps up the limelight, usefully serves as a public face:

However as an ambassador for the “unarmed and neutral” White Helmets, Mounir’s mask is somewhat loose fitting: [4] 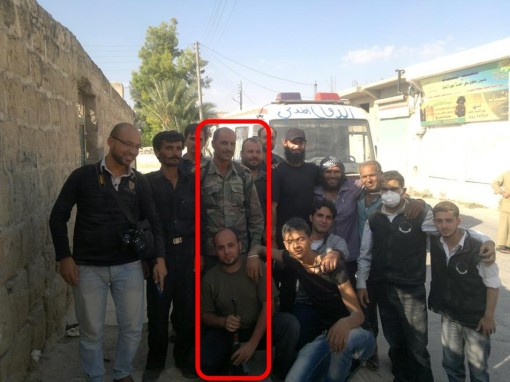 In an Atareb White Helmets Facebook post of 18 August 2013, eight days before he was filmed by the BBC at Atareb Hospital, “Captain” Ali Obied Abo Alkasem is described as “Director of the Center for Civil Defense in the liberated area of Al-Attar.”

These days the Captain describes himself as

Emergency Trainer, Community Awareness and Support Civil Defense Officer with the rank of Captain Experience in planning, organization and training [7]

While the Captain’s Facebook profile image (above) depicts a statesmanlike paragon of the White Helmets professed principles of “Humanity, Solidarity, Impartiality”, other of his social media effusions somewhat dent this image:

Ghassan Al-Mustafa gallantly has Dr Rola Hallam’s back as she takes “a break” from the “chaos and carnage ” of what she elsewhere describes as a “mass casualty event” to chat with BBC cameraman Darren Conway. (32.34, Saving Syria’s Children). 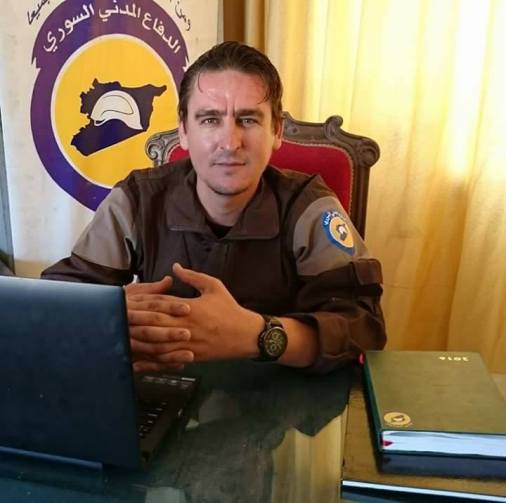 Images from the Atareb White Helmets and Ghassan Al-Mustafa‘s personal Facebook pages. Note in third image the logo of Hand in Hand for Syria, the UK charity featured in Saving Syria’s Children, an employee of which has been pictured posing with an array of munitions.

Like the Captain, Ghassan too struggles with the White Helmets’ professed creed of neutrality and impartiality: [9] 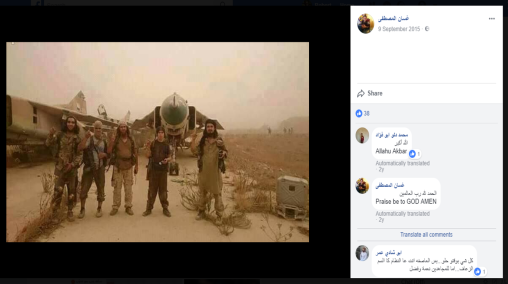 A ubiquitous figure in the Atareb White Helmets Facebook posts is an unnamed officer who, as previously noted, appears to have been on the scene during the aftermath of the alleged incendiary attack in Urm al-Kubra, Aleppo:

Background image: male present at scene of alleged incendiary attack on a residential building, Urm al-Kubra, 26 August 2013 (see from 3:10 to 3:13 here). Inset image: what appears to be the same individual interviewed following the destruction of the White Helmets centre at nearby Atareb, 26 April 2016 (see from 38s here).

A medic in a blue tunic who appears at several points in the BBC’s footage from Atareb Hospital also turns up in an Atareb White Helmets Facebook post:

Male medic at Atareb Hospital gate (Dr Rola Hallam in foreground) in Ian Pannell and Darren Conway’s 29 August 2013 BBC News report. The medic appears in other scenes in this report and in the associated BBC Panorama programme Saving Syria’s Children. 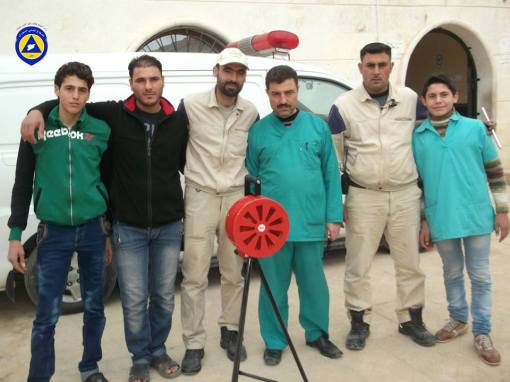 Memorably, this ostensibly dour humanitarian could barely suppress mirth when interviewed about the alleged incendiary attack just one day later by the Aleppo News Network:

The picture that begins to emerge is that, far from the random assemblage of locals and officials one might expect to attend an incident such as the one alleged by the BBC, many of those captured on film in the town of Urm al-Kubra and at Atareb Hospital, Aleppo on 26 August 2013 more closely constitute a Who’s Who of UK and western backed anti-Syrian forces.

It is established that the BBC Panorama team of Ian Pannell and Darren Conway were embedded with “hardline Islamist” group Ahrar al-Sham throughout the recording of Saving Syria’s Children in August 2013. Ahrar al-Sham were co-founded by “one of Osama bin Laden’s most trusted couriers” and just three weeks earlier had, along with both ISIS and al-Qaeda affiliate Jabhat al-Nusra, been among “the key fundraisers, organizers, planners, and executors” of an attack in which at least 190 civilians were killed and over 200 – “the vast majority women and children” – were kidnapped.

Furthermore, in the midst of the alleged crisis, Conway filmed, at close quarters, an ambulance plainly bearing the ISIS logo, along with its militarily attired and armed occupants [10]:

In other scenes, figures which could resemble Western state special forces operatives are glimpsed and in one YouTube video a commander of the Ansar Brigade, Yusuf Zou’a (now deceased), expatiates upon the day’s events:

Can there really be any doubt remaining that the alleged Urm al-Kubra incendiary attack and its aftermath were a concoction of western state intelligence agencies aimed at furthering a regime change agenda in Syria?

[1] Independent journalist Vanessa Beeley has researched the real Syria Civil Defence, which was established in 1953, is a founding member of the ICDO (International Civil Defence Organisation) and which, unlike the White Helmets, works to rescue civilians wherever it can within Syria; the White Helmets operate exclusively in Jabhat al-Nusra strongholds, fleeing these areas along with Nusra militants once they have been secured by government forces.

In May 2017 renowned documentary filmmaker and journalist John Pilger described the White Helmets as a “complete propaganda construct” and more recently even the extreme right-wing Fox News has conceded that the White Helmets are “not always the most reliable” and possess “their own agenda”:

Doubts about #whitehelmets now reaching even as far as ultra-Right Fox!
A telling statement! pic.twitter.com/RivB5dnr6v

[2] The Atareb White Helmets Facebook pages include several images of Le Mesurier and graduates of an August 2014 Emergency Response training:

[3] Described by ITV News as a “brave accountant“, Abazeed prefers to describe herself on Facebook as a journalist. Whatever Abazeed’s professed profession, her social media postings leave no doubt of her affiliations:

[4] As are those of so many of his comrades: 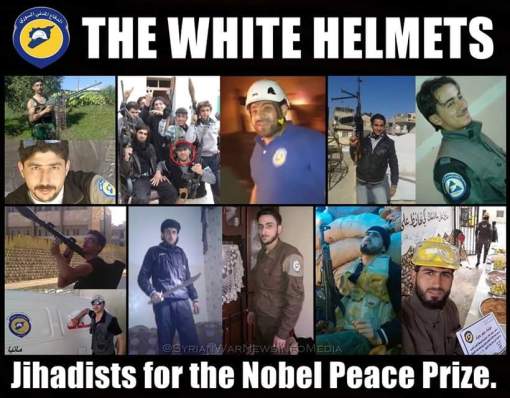 [5] Former Reuters freelance photographer Amer Alfaj attends the firing of a “Hell cannon” mortar in 2013, around the time he was also employed at Bab al-Hawa hospital on the Turkish border:

Alfaj also celebrated the munition in images such as these:

[6] In a slightly later shot from Saving Syria’s Children we see that the Captain’s tunic bore the logo of the Free Aleppo Governorate Council: 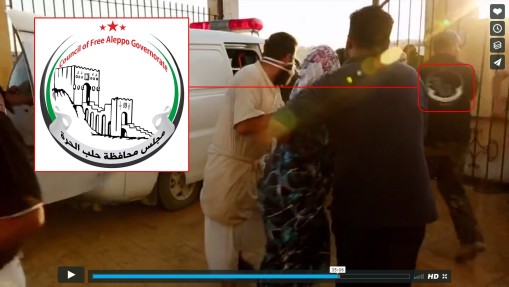 The Council formed in March 2013 to provide services and administrative assistance for civilians living in free areas of Aleppo Province.

The White Helmet group in East Aleppo was established by the president of the East Aleppo Council (EAC), [Abdulaziz] Maghrabi, who has clear affiliations to terrorist groups inside Syria. Maghrabi is also an active militant member of those groups, by his own admission.

[8] In his Facebook intro Ghassan describes himself as “Trainer at the Training Center at the Syrian Civil Defense“, although the hyperlink is to the Wikipedia entry for the Mayday Rescue Foundation. This is quite congruous. As Vanessa Beeley notes, White Helmets founder James Le Mesurier:

is also the founder of Mayday Rescue, a “non profit” organisation providing SAR [search & rescue] training to civilians enduring conflict. According to Mesurier’s own biography on the website, Mayday Rescue was founded in 2014, after he had established Syria Civil Defence/White Helmets.

Its primary function appears to be as an intermediary “not for profit,” set up as a conduit to receive and transfer funds to the White Helmets.

The White Helmets receive funding from the UK government’s Conflict, Stability and Security Fund (CSSF) and the US government’s USAID, Office of Transition Initiatives programme – the Syria Regional Program II. The UK and US governments do not provide direct training and support to the White Helmets. Instead, private contractors bid for the funding from the CSSF and USAID. Mayday Rescue won the CSSF contract, and Chemonics won the USAID contract. As such, Chemonics and Mayday Rescue train and support the White Helmets on behalf of the US and UK governments. 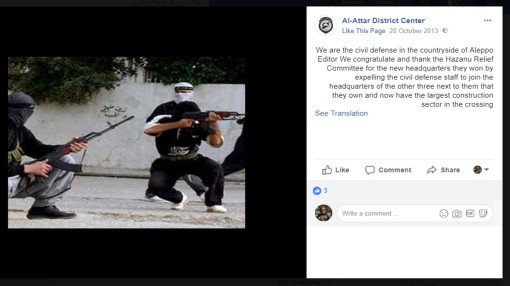 The translation is unclear but, read in conjunction with the ugly accompanying image, here the Atareb White Helmets seem to congratulate “The Hazanu Relief Committee” for a violent takeover of premises. (Facebook, 28 October 2013; a more accurate translation of the original Arabic would be welcomed).

Curious too is this sequence (commencing here and concluding here) which appears to show the Atareb White Helmets in receipt of clothing and blankets branded with the national emblem of Saudi Arabia:

[10] It is possible that the three men in the ambulance were not themselves ISIS militants, but were using the ISIS emblem to demonstrate allegiance, and hence ensure their own security, within an ISIS stronghold. This then begs the questions of why the BBC Panorama team of Ian Pannell and Darren Conway were themselves able to move freely in ISIS territory, as was seemingly demonstrated by their unobstructed passage through an ISIS checkpoint in an earlier segment of Saving Syria’s Children.