Subsequent correspondence with the BBC on this matter:

I presented a summary of my concerns regarding Saving Syria’s Children to Jeremy Corbyn MP on 16 December 2015.  See also this presentation for Frome Stop War.

I wish to appeal against BBC Complaints’ decision on my Stage 1b complaint regarding BBC presenter Dr Saleyha Ahsan, notably with reference to potential breaches of the Geneva Convention committed by Dr Ahsan in publishing on Facebook photographs of a captive in the 2011 Libya conflict.

In addition to the observations on the Geneva Convention made by former BBC legal correspondent Joshua Rozenberg referenced in my Stage 1a and Stage 1b complaints, former president of the International Committee of the Red Cross Jakob Kellenberger has stated:

To pursue the responsibility of an individual it is necessary to show that the individual not only knew of the action but knew or should have known of the possible consequence that it would subject a civilian or prisoner to public scrutiny and/or ridicule. This element of mens rea must always be accompanied by an actus reus or action covered by the law.

With regard to Dr Doebbler’s remarks, please note the privately made observation of a former army officer that, as a British army officer, Dr Ahsan would have received extensive and comprehensive training on the workings of the Geneva Convention, especially in respect of the treatment of prisoners. This would appear to make it unlikely that Dr Ashan would have been unaware of her responsibilities in this regard, whether at the time a serving officer or not. Note too that another of Dr Ahsan’s Facebook page states “She has also completed a LLM [Master of Laws] in International Human Rights and Humanitarian Law at Essex University”.

As I observed in an email to the Trust, all of Dr Ahsan’s Libya photographs were removed from her Facebook account shortly prior to 10 September 2015. (For instance, see the original locations of the two images above here and here). Please note the collection of screengrabs here which demonstrates that all the images I refer to in my previous complaints were viewable on Dr Ahsan’s Facebook account in April this year. [1] I can also provide screengrabs of Dr Ahsan’s original posts of the images of the captive which demonstrate that his face was visible in them.

With respect to Dr Ahsan’s association with the organisation Hand in Hand for Syria [2] please note that the Charity Commission’s Investigations Monitoring and Enforcement department confirmed on 23 September 2015 that it is to consider a number of concerns which I have formally raised.

[1] I have included several other of Dr Ahsan’s previously publicly viewable Libya images which I believe engage Section 15.4.5 of the BBC’s Editorial Guidelines in respect of “the public’s perception of the impartiality, integrity or independence of BBC output”.

[2] Concerns about Hand in Hand for Syria are summarised here.

(L-R) Dr Rola Hallam, a Hand in Hand for Syria nurse and Dr Saleyha Ahsan, in a segment of BBC Panorama ‘Saving Syria’s Children’ (http://bit.ly/1wO3p2w) filmed at Atareb Hospital, Aleppo on 26 August 2013. Dr Hallam is a member of Hand in Hand for Syria’s executive team and Dr Ahsan is described as volunteering with the organisation. 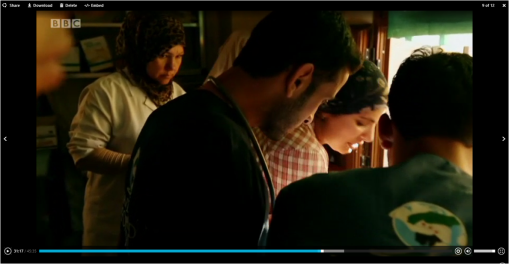 The Hand in Hand for Syria nurse who was filmed alongside Dr Ahsan by the BBC appears to treat a child combatant in the distinctive setting of Atareb Hospital in this web image dated June 2014 (http://slnnews.co/?p=2578). The word “Hand” is plainly visible on the white tunic upon enlarging the image. Further highly shocking images of the same child and other children attached to the same militia unit are here http://bit.ly/1gXfYYt